We have a brand new website and are moving our blog! We would love for everyone to keep following us...Simply pay us a visit on www.westrivarts.com.au and check it out...It's definitely worth it! 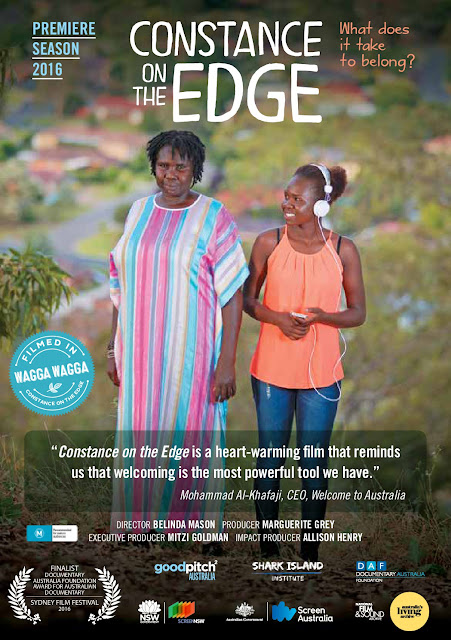 One family. Two wars. Three countries. What does it take to forge a new life far from home?
Walk in the shoes of a Sudanese refugee as her resilience is tested to the limit striving for a settled life in rural Wagga Wagga, NSW. Constance on the Edge tells the story of feisty and charismatic Constance, a mother of six leading her family away from their painful past in war torn Sudan and years spent in border camps before making the regional NSW town their new home and risking everything in Australia so her family can thrive.

Constance and her family are facing serious challenges – discrimination, disappointments, run-ins with the law and the resurgence of post-traumatic stress symptoms. Mary, Constance’s niece, finds it impossible to find a job in Wagga; Vicky, her daughter, studies every morning from 4am, hoping to get into university and Charles, 23, is struggling with alienation and depression.

Director and Human Rights Award Winner Belinda Mason wanted to put refugee issues at the forefront of people’s minds. "Refugees are strengthening our communities across the country. I envision Constance on the Edge as contributing to the national conversation around refugees by highlighting the complex issues and experiences they face in Australia. What we gain as a nation by creating more welcoming communities for refugees is at the heart of this story."

Nominated as a Finalist for the 2016 Sydney Film Festival for the Documentary Australia Foundation Award in the category Australian Documentary, Constance on the Edge gets to the heart of a contemporary untold story about the courage and resilience it takes to build new lives.

Western Riverina Arts Executive Officer Derek Motion is excited to be able to bring the movie to theatres in Leeton and Griffith. "In light of the current global refugee crisis this topic seams more important than ever and to raise awareness and acceptance with a story right from our region is great. It also presents a fantastic opportunity to have the Director and Constance talk about the creative process and outcomes of the film."

Filmed over 10 years Constance on the Edge is a longitudinal study of one refugee family’s struggle to forge a new life in Australia and the important role communities play in encouraging a sense of belonging for everyone.

Presented by Western Riverina Arts Constance on the Edge will be coming to movie theaters in Leeton and Griffith 24 & 25 September. The 80 minute film will be followed by a Q&A with Director Belinda Mason and Constance. We would love to see you there!


Posted by Miriam Rystedt at 13:26 No comments:

Regional Landscapes and People Celebrated at the Powerhouse Museum

The Cad Factory has just returned from presenting an artwork called Shadow Places at the Powerhouse Museum for Sydney Design Festival, from 2 - 11 September. 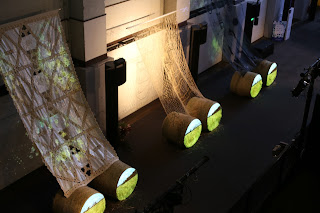 Shadow Places consists of six round straw bales, with video projections onto the front of the bales with sound telling the story of local design. Alongside the straw bales are three large textile hangings linking the hay bales and video content.

Local farmers, John and Kathleen Foster, Jan and Garth Strong and Graham and Amanda Strong have been included in the projection work, along with Colin Seis from the Gulgong district, in the central tablelands of NSW.

Voice over for the projection work was done by Boree Creek resident, Steve Harradine.

The artwork was presented as part of the Sydney Design Festival and celebrated the way farmers design and modify equipment, systems and processes in order to adapt and devise new practices. 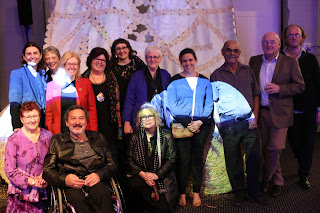 The term ‘Shadow Places’ comes from the writings of eminent Australian philosopher Val Plumwood, who talked about the notion that our place in the world is supported by what she calls ‘Shadow Places’, referring to the places that we rely upon but don’t know. For example, urban people are intimately tied to area’s like the Riverina, for their food and fibre production, however, there is little opportunity for these people to get to know the land and communities that they rely upon.

Vic McEwan said, “It is a very important step to present a work like this as part of Sydney Design Festival. We are showcasing the idea that design doesn’t just happen in our capital cities, that in fact, user-led design is happing all over our regional areas. This has a big effect on people back in the cities, through improvements in production of food and fibre and also in the development of new types of more ecologically driven agricultural practices.”

The Powerhouse Museum estimate that 20,000 people saw this artwork in just 11 days. The inclusion of Shadow Places in such a high profile city institution has been a fabulous opportunity to share the story of the Narrandera region and to celebrate the community members involved in the project.

Posted by Miriam Rystedt at 16:00 No comments:

Western Riverina Arts has recently received a philanthropic donation to specifically assist with the professional development of artists and arts-workers living in the Griffith region. The donation was used to offer three grants to the value of $1000 to help Griffith-based artists to attend ARTLANDS,

We are pleased to announce the following artists as the recipients of the WRA Conference Grants:
All artist were really excited about the opportunity and are looking forward to attend the biennial regional arts conference and festival in Dubbo from 27-30 October 2016.

If you missed out and are still keen to go to ARTLANDS we've got good news for you - Arts NSW is offering up to 10 bursaries for NSW artists and arts cultural workers to attend the ARTLANDS Regional Arts Conference. Each bursary allocation will cover full registration for the four day conference event.

Bursaries are open to all NSW artists and art and cultural workers however priority is given to people who live in regional NSW and Western Sydney and to young people, Aboriginal people, people with disability and from a culturally and linguistically diverse background.

Posted by Miriam Rystedt at 19:40 No comments: 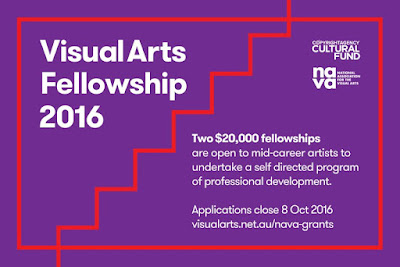 This Fellowship will address the ‘mid-career desert’ where there are fewer existing opportunities for visual arts, craft and design practitioners and wants to ensure that two outstanding mid-career artists or collaborative groups can explore the next major developmental step in their practice and seek opportunities to enhance their reputations, build professional relationships and consolidate their careers.

Contemporary Australian painter and NAVA board member, Michael Zavros says, “This is an exciting new initiative offered by NAVA. We have such a fascination with young and emerging art in Australia and a focus on what's new and what's next that mid-career can be a long slow burn where artists lose impetus and find their careers plateau.”

This support also ensues artists will be temporarily relieved of the need to generate income allowing them to concentrate on the longer-term expansion of new ideas, artistic processes and career directions.

“Mid-career artists also find it increasingly difficult to extend their practice and take necessary risks, to make time for skills development and experimentation. These fellowships will give outstanding developing artists support at a crucial time in their development,” Zavros continued.

The fellowships will be open to individual mid-career artists and groups and can be used toward a range of activities in 2017 which may include, but not limited to research, travel, skills development, residencies, mentorships, professional development and training, and the creation of new work and exhibition/project costs.

Posted by Miriam Rystedt at 12:35 No comments:

Music: Count Us In - One Song, Your School, More Music

Music: Count Us In is an Australian schools initiative, where students across the country get the chance to be a part of something BIG and celebrate music by singing the same song, on the same day, at the same time.

The goal is to encourage young people to become passionate about music and musical education and Music: Count Us In is inviting all Australian schools to get involved. All you need to do is register your school for free, learn this year’s song and join more than half a million kids for Celebration Day on Thursday November 3rd.

Music: Count Us In 2016 has now launched and gives teachers and student across the country the chance to be a part of it. The 2016 Program Song ‘Let It Play’ was written by students Stella Kelly (16, WA), Tom Meadows (11, VIC), Bonnie Staude (14, WA) and Breanna Truscott (14, QLD) along with the Program Ambassador and Mentor. (See the video above)

Working directly with schools and teachers, Music: Count Us In assists teachers in providing quality music education to Australian schools. The program is both a participation program and an advocacy program – raising the profile of music education on the national stage, and providing students with practical music learning.

Spurred on by a 2007 National School Music Review which pointed to glaring inadequacies in music education in schools, the report included a recommendation to raise the status of music in schools. Music: Count Us In was the response. It's purpose is to energise and engage teachers, principals, school communities, and families, and to provide quality music participation opportunities, available to all.

The program has exceeded expectations by extending into all states and territories, and connecting with schools of every shape and size. It is freely available to every student in the country.

Actor and singer Jay Laga’aia of ‘Play School’ fame joins Music: Count Us In this year as program mentor. “I’m really looking forward to seeing how people interpret the song. This is very much a story that you send to different communities and they come back with their versions of the story. To get together on that special Celebration Day and for everyone to sing it – for me, that’s going to be very exciting!”

For more information and to become involved please visit www.musicaustralia.org.au.
Posted by Miriam Rystedt at 12:00 No comments:

Griffith Regional Art Gallery "FLOWER POWER" - be part of it! 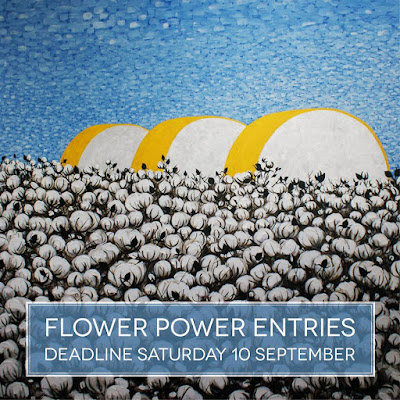 Spring is finally here, the first vivid flowers are blooming and what a beautiful sight it is. Definitely time to put this delicate creation of nature in the spotlight and celebrate FLOWER POWER at the Griffith Regional Art Gallery. The annual community exhibition will be on from Saturday 17 September to Sunday 16 October and will coincide with the towns popular Festival of the Gardens.

And YOU can be a part of it!

Griffith Regional Art Gallery is inviting all local artists to enter up to two works in any medium (painting, drawing, printmaking, photography, sculpture, etc) based on the theme "Brighter is better". The artworks and entry forms need to be handed in by Saturday 10 September and a number of awards will be given to outstanding artworks.

Drop off your completed entry form and artwork/s to Griffith Regional Art Gallery on Saturday 10 September 2016 between 10am and 5pm. When you deliver you will be required to pay entry fee of $5 (per artwork) to the Gallery. All work must be presented ready to be hung.

Is open to all students from Preschool to Year 12 aimed to encourage and develop young artists. The awards will be judged by the Sainty family. A number of awards will be given:

Interested? Fill out the entry form now and be a part of FLOWER POWER - Brighter is better!

Posted by Miriam Rystedt at 10:40 No comments: